A few weeks ago, Pope Francis participated in a meeting in Bahrain, a country of islands in the Persian Gulf with a predominantly Muslim population.

Any apostolic visit of Pope Francis involves a meeting with the local Jesuits working in the country. The Pope encourages them to carry out their mission within the specific context of that region. But there are no Jesuits in Bahrain. Could there still be some insights to draw from his gestures and words for the Jesuits and the broader “Ignatian family”? Yes, what Pope Francis did and said over there is very pertinent to the Jesuits’ contemporary “mission of reconciliation and justice.” The 34th General Congregation of the Society of Jesus, Decree 5, entitled “Our mission and interreligious dialogue,” states: “Our experience in the service of faith and promotion of justice over the last twenty years has brought many of us into closer contact with believers of other religions. They have helped us to respect the plurality of religions as the human response to God’s salvific work in peoples and cultures” (GC 34. D5). 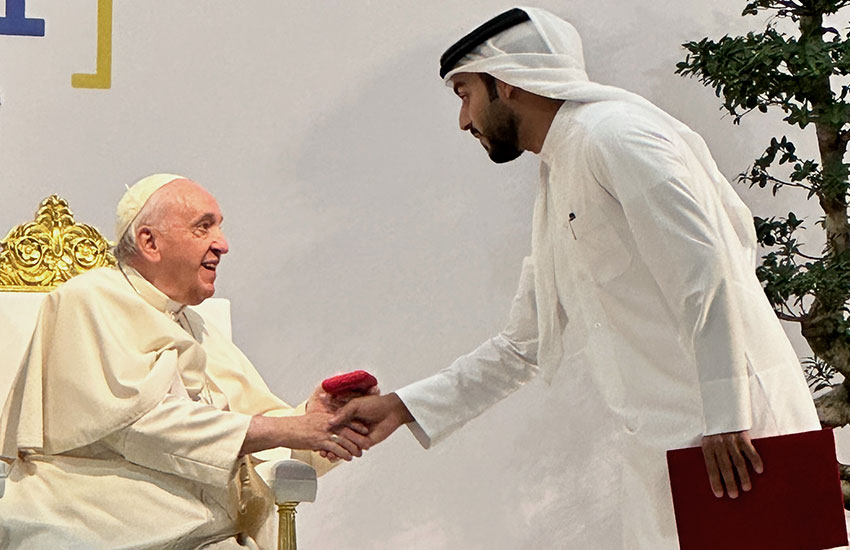 The apostle of peace in the land of Arabia

Pope Francis addressed the Bahrain Forum for Dialogue during his Apostolic Journey to Bahrain, a conference on “East and West for Human Coexistence.” The Holy Father stressed that “every encounter and every event can be a fruitful opportunity to promote, in the name of God, the cause of fraternity and peace.” The Vatican Secretary of State, Cardinal Pietro Parolin, stated that the Apostolic Journey was a sign of hope and dialogue amid a tragic historical moment. In a “world marked by tensions, oppositions, and conflicts”, the Pope’s visit and actions in Bahrain are “messages of unity, cohesion and peace”, he said.

Pope Francis commented on the “Tree of Life” (Shajarat-al-Hayat), the country’s remarkable “emblem of vitality”. This beautiful acacia tree has thrived for generations in a desert region. He also mentioned that Bahrain’s greatest treasures are its ethnic and cultural diversity and its people’s peaceful coexistence and traditional hospitality.

Bahrain is an archipelago of over thirty islands, and the name Bahrain means “two seas”. Pope Francis said that “Tragically, the East and the West increasingly resemble two opposite seas. However, we all intend to sail the same waters and to choose the path of encounter rather than confrontation.” In the Bahrain Declaration, he stressed that religious leaders must encourage and help our human family, interdependent yet separate, to sail the sea together. He emphasised that education is the path to liberation from legacies that run counter to the spirit of fraternal solidarity that should characterise those who worship God and love their neighbour. 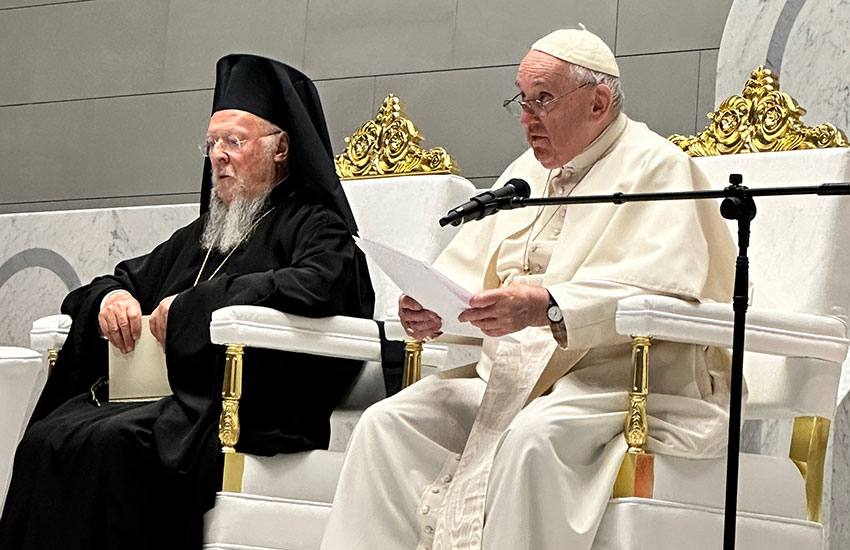 When Pope Francis met the members of the Muslim Council of Elders, he emphasised that peace is born of fraternity, that it grows through the struggle against injustice and inequality, and that it comes from reaching out to others. He also thanked them, saying he was impressed by how it is customary in these countries to place the hand on the heart as a sign of affection when greeting guests.

During the ecumenical prayer meeting, Pope Francis said, “Christianity is not a privilege to be claimed for oneself, but a gift to be shared with others. Life in Bahrain, he added, has enabled many of you to rediscover and practise the absolute simplicity of charity. It will do us good to examine how we use the Beatitudes to reflect Jesus in our daily lives.”

In keeping with the spirit of the 34th General Congregation

In conclusion, there is a clear link between Pope Francis’ apostolic visit to Bahrain and the spirit of the General Congregation of the Jesuits in 1995. The Holy Father has supported our experience in the service of faith and promotion of justice over the last twenty years, bringing many of us closer to believers of other religions.

For educators – The Pope Video

We pray that educators may be credible witnesses, teaching fraternity rather than confrontation and helping the youngest and most vulnerable above all.