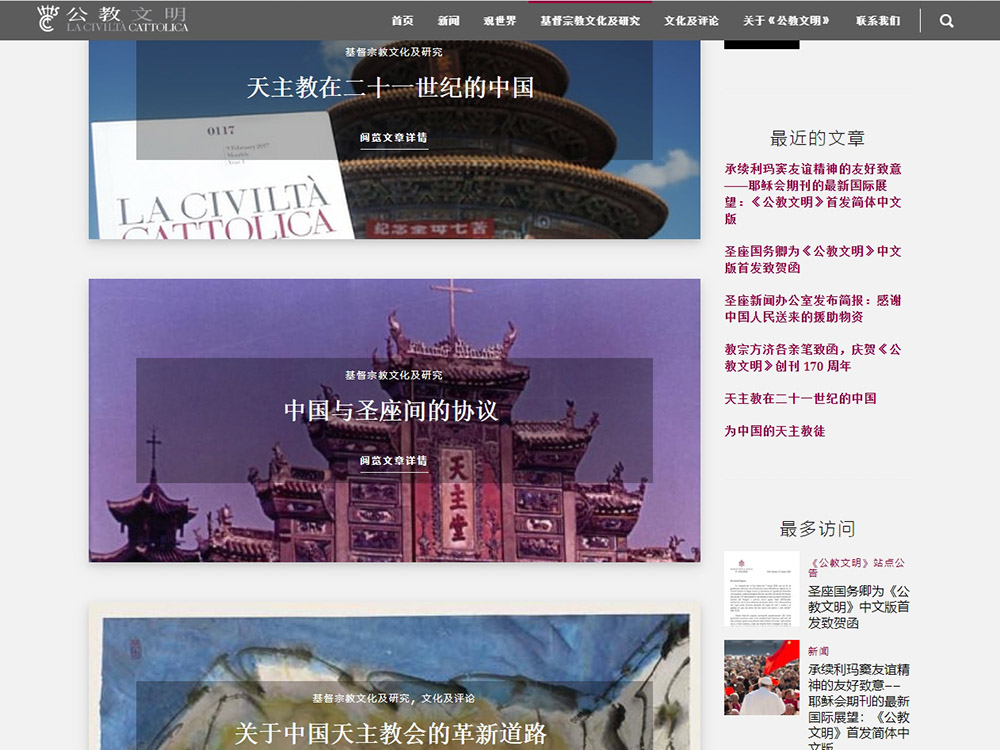 Culture, theology, philosophy, history, economics, politics, science and the arts, all under a faith perspective: few contemporary areas escape the attention of the Jesuit journal. Reflection on current events is its focus, based on a 170-year tradition of analysis of recent developments. Innovation has often characterized its work, and this is still the case now that it has just launched its Chinese edition.

This is "a gesture of friendship in the spirit of Matteo Ricci", in a world context where the Chinese language has a definite weight. The Secretary of State of the Vatican, Cardinal Pietro Parolin, supports this initiative which, he writes, is opening a new chapter in the friendly encounter with the rich tradition of the Chinese people. The Cardinal emphasizes that this openness fits well with the particular mission of the publication, which is to build bridges and establish dialogue with all peoples. He adds, referring to an address by Pope Francis when he visited the Civiltà Cattolica team, that this spirit of universal dialogue makes it possible to reach out not only to believers but also to those who, without sharing the Christian faith, nourish a particular respect for human values.

On the occasion of the launch of this new edition, the editorial team affirms that it continually keeps in mind the dialogue between Christian faith and contemporary culture. This sixth edition - in addition to those in Italian, English, French, Spanish and Korean - is a further proof of the obviously international character of the magazine which, for a long time, was mainly oriented towards the Italian world.

Pope Francis himself cited La Civiltà Cattolica as a model for his desire to make known a man who loved China without reserve, Matteo Ricci (1552-1610). This Jesuit, who arrived in China at the age of 30, made possible unprecedented interactions between the Chinese and European peoples. Thanks to Ricci, European cultures learned much from Chinese wisdom, a source that has always fascinated the Jesuits. It is fitting that a publication such as La Civiltà Cattolica should continue this work of mutual knowledge.

The Chinese edition uses the simplified Chinese script, the most widely used in the People's Republic of China and by many Chinese around the world. It has its own specific web address: https://www.gjwm.org. The site is divided into four parts: news, the world, Christian reflection and culture. Finally, it should be noted that the Chinese authorities have been made aware of this initiative by the Chinese Embassy in Rome and, informally, by the Holy See. Moreover, they have expressed a positive view of this development.

Communications
Share this Post:
Webinar: Caring for the mission post COVID
Being a Catholic politician in India today, is it possible?
Posted by Communications Office - Editor in Curia Generalizia

Supporting the Ignatian Year through publishing

Do we talk enough about our faith?