This photo, taken at the beginning of his pontificate - and before the era of social distancing - was taken during the first visit of Pope Francis to the Centro Astalli in Rome, the JRS (Jesuit Refugee Service) antenna in Italy. We all know how much the fate of refugees has been and still is a great concern for Francis. He has visited refugee camps on numerous occasions as proof of his concern.

Two weeks ago, the director of the Centro Astalli, Fr. Camillo Ripamonti, had the surprise of receiving a letter from the Pope. Pope Francis thanked the Social Center for sending him a copy of its annual report for 2020. Considering the number of documents that are sent to the Holy Father, the fact that he took the time not only to look at the report but also to write a letter about it is a strong testimony to the Pope’s appreciation of the work of JRS.

Pope Francis wrote: “I would like to express my sincere appreciation to you, your staff and the volunteers for the courage with which you are addressing the ‘challenge’ of migration, especially at this delicate time for the right of asylum, as thousands of people are fleeing war, persecution and serious humanitarian crises. May your example inspire in society a renewed commitment to a genuine culture of hospitality and solidarity.

“My thoughts also go to the refugees whom you welcome with fraternal love: I am spiritually close to all of them in prayer and affection and I urge them to have confidence and hope in a world of peace, justice and fraternity among peoples.” 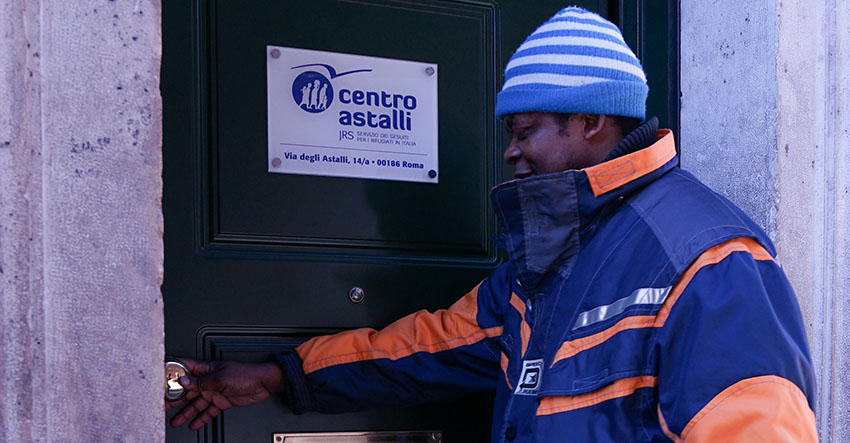 In the Jesuit milieu, this closeness, this fraternal love of Francis for refugees was eloquently manifested in the support he gave to the “Migrants and Refugees” section of the Dicastery for Integral Human Development. In choosing last December to make the head of this section, Jesuit Michael Czerny, one of the cardinals of the Church, he underlined how central the work of this team is, according to his vision of the presence of the Church in today’s world.

The Migrants and Refugees section has been and still is very active in this time of the COVID-19 pandemic. It has published several documents and has initiated several actions as part of a campaign entitled “COVID-19: No one must be forgotten”. Indeed, the trap exists, that when people - or nations - face real difficulties, they can focus on their own interests and forget those who are also experiencing major existential dramas. This is the case for so many refugees around the world.

In its latest weekly bulletin, the campaign “No one must be forgotten” highlights initiatives by various national Churches, religious congregations and social centers that are helping migrants and refugees to understand the pandemic and to take the necessary steps to protect themselves from the disease. All this is to put into practice the wish of Pope Francis who said: “We can only get out of this situation together, as a whole humanity.”