Fr. Stan Swamy's lawyers' request for bail - under conditions - for the elderly Jesuit who has been in prison since 8 October last year was denied by a judge in Mumbai on 22 March. He is accused of participating in acts of violence against the Indian state.

This is another "black" date in the judicial saga of the elderly Jesuit. The National Investigation Agency - the agency that arrested Fr. Swamy - opposed his bail because of the gravity of the accusations. This is the conclusion of this “chapter” in a special NIA court, a first instance court. It is now possible for Fr. Stan’s lawyers to present the case to a higher court, not linked with the NIA. Let us recall some of the facts and the support Fr. Stan has received.

Since his arrest on 8 October 2020, Jesuits and their partners in India and elsewhere in the world have called for the release of Jesuit Stan Swamy, 83, who is being held prisoner in Mumbai. Father Stan was arrested for allegedly plotting with an illegal Maoist political party against the Indian government and for participating in acts of violence during a demonstration on 1 January 2018. These charges and the related case file are obviously false. 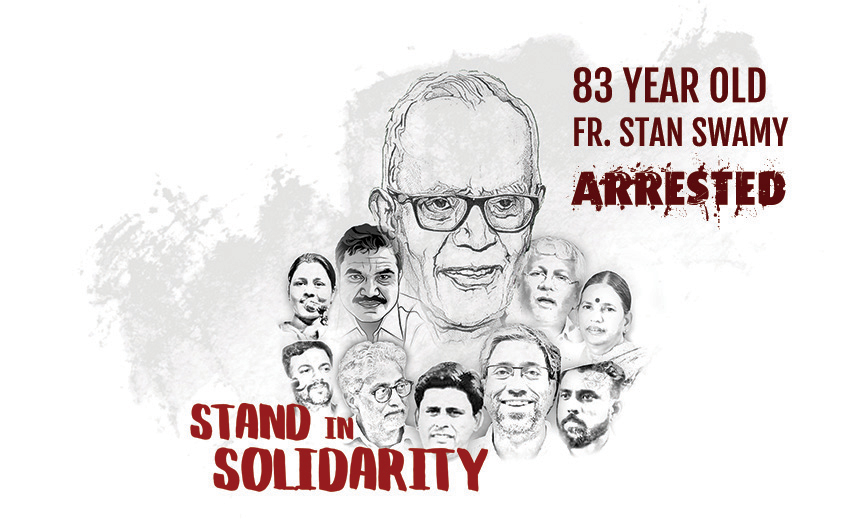 In fact, Father Stan, like the 15 other people who were arrested in connection with these events, are human rights activists, particularly for the rights of Dalits, indigenous groups and other groups of poor people in India. These committed people are using non-violent legal instruments to demand better living conditions and respect for the poorest. They are driven by Gospel values.

The Office of the High Commissioner for Human Rights of the United Nations has been made aware of the injustice of the incarceration of Father Swamy and his companions. It called on the Government of India to fulfil its obligations under the International Covenant on Civil and Political Rights. But the Indian authorities have been, up to now, turning a deaf ear. So the Jesuit Conference of South Asia (JCSA) and the Secretariat for Social Justice and Ecology of the General Curia have joined forces to make a new approach to the United Nations. It is hoped that pressure will once again be brought to bear on the judicial authorities of India.

To learn more about Father Stan and his apostolate, to find out more about his arrest and the demonstrations in his favour that have taken place since October, visit the site dedicated to him by JCSA.

With the conflict in Ukraine continuing, the humanitarian emergency grows unabated. UNHCR reports that almost 3 million refugees have already been forced to flee...

Both in Ukraine and in Poland, Jesuit communities and partners of the Society of Jesus are actively involved in welcoming those fleeing the war in Ukraine.