The Pontifical Gregorian University has also “launched” the Ignatian Year

The Gregorian University of Rome chose to celebrate the Ignatian Year with a symposium on the very day of its opening, 20 May. The title that guided the various interventions was the same as the motto of the anniversary for the whole world: “Seeing all things new in Christ”.

After the greeting of the Rector and the presentation of the President of the Institute of Spirituality, Fr. General Arturo Sosa appeared via video, since he was in Pamplona for the inauguration of the Ignatian Year, 500 years after the wounding of St. Ignatius. In his message, he wished that the encounter with the Lord would make it possible to acquire his gaze, which will allow - as the pilgrim of Loyola did - to follow the path, that is, the Lord Himself. It is from this point where personal and institutional transformations can be made possible.

Johan Verschueren, Delegate of Fr. General for the Interprovincial Houses in Rome, encouraged the Gregorian University to contribute to the anniversary by practising community discernment and spiritual conversation, and thus to move towards a synodal model of Church. This would be - in his view - a good understanding of both individual and communal conversion. 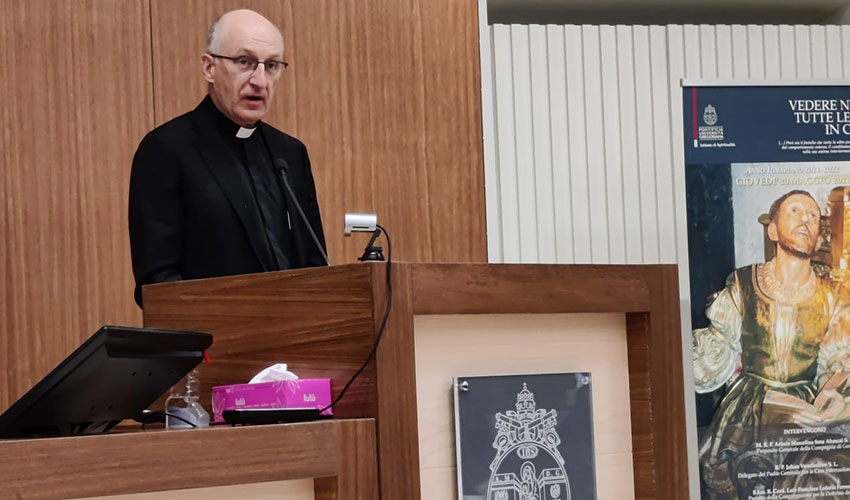 Next, the Prefect of the Congregation for the Doctrine of the Faith, Cardinal Luis Ladaria, SJ, addressed the topic “The inner struggle and conversion of Íñigo López de Oñaz y Loyola”. In his lecture, he developed on several levels the process of discernment of Saint Ignatius from the wound of Pamplona to his death in Rome. He dealt successively with the pilgrim Ignatius, the founder of the Society of Jesus and author of the Constitutions of the Order, his Superior General of the Jesuits, and the Roman Ignatius, who combined the writing of some 7,000 letters with a Spiritual Diary that revealed his more mystical side. In his journey of conversion throughout a rich and multifaceted life, Ignatius was marked by the continuous presence of the magis, his progressively purified inclination to the fulfilment of God’s will, and the orientation of his vocation and the charism of the Society of Jesus towards “helping souls”.

In the afternoon, the Prefect of the Congregation for the Causes of Saints, Cardinal Marcello Semeraro, gave a talk entitled “Holiness: discerning the presence of God and finding him in all things”. He focused on the desires to seek God found in Saint Ignatius, as well as in all the great spiritual authors and saints in their respective paths of holiness. He stressed how it is a discerned search for God’s will, which is possible to find. He also referred to various parts of the Spiritual Exercises and their culmination in the “Contemplation to attain love”. Recalling Pope Francis, he pointed out the importance of always asking oneself which God one wants to seek and find, for which discernment is essential as a condition for finding His presence in everything.

The event was closed by Prof. Emilio González Magaña, SJ, who pointed out how St. Ignatius is a reliable witness to the search for God for those who want to order their lives, as the book of the Exercises points out.

With this collaboration in the launching of the Ignatian Year, the Pontifical Gregorian University has played a specific role corresponding to its charism of leadership in the intellectual apostolate at the service of the Society of Jesus and the Ignatian family in the Church.

Curia Ignatian Year
Share this Post:
24 May: Feast of Our Lady of the Way
The Ignatian Year: from suffering a wound to seeing things in a new light
Posted by Communications Office - Editor in Curia Generalizia

Arturo Sosa: “To place Jesus, the Christ, at the centre, and therefore to change ourselves.”

A gift from Canada for the Ignatian Year

Restorative justice: an opportunity for prayer for Father General and his Council

Albert Vanhoye SJ – “It’s a service to be rendered”

Arturo Sosa: “To place Jesus, the Christ, at the centre, and therefore to change ourselves.”